Super close Mother LYN and daughter IONA (Dafty One and Dafty Two) are excited for their new life in a new town.  Determined to make a success of things after a tricky start, Iona becomes ‘best friends’ with KEELY, STACEY and CHELSEA. Used to being Iona’s bestie herself, Lyn feels left out.  So Lyn also makes friends with BELINDA, her neighbour.

As much as Lyn and Iona pretend to each other that things are going great, things aren’t going great for either of them. Iona struggles with the girls, who act more like frenemies than friends, and Belinda won’t give Lyn her stepladders back. Both Mother and Daughter retreat into fantasy and lies. 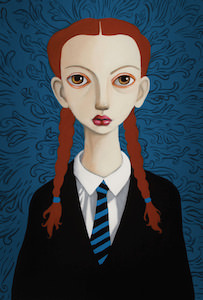 You only get one opportunity to make your first feature film so it felt important for Pin Cushion to be as ‘me’ as possible.

I feel it’s important to make films about these subjects because I would love to see a film like this, especially at times when I’ve been struggling.  And the fact is that female stories such as these are rarely seen on the big screen, and if they are, they’re often not from a female storyteller.  This motivated me even more.  Of course making a film so personal is scary because it is so exposing.

One of the main themes of Pin Cushion is precisely about being trapped in presenting a version of yourself. Which happens to all of us, but particularly women. As a filmmaker, it was important for me to be authentic and invest myself in this story, which meant opening myself up.  I was going through the most horrendous time in my personal life, and that somehow made me feel strong. And bold. And made me just go for it.  I felt I wanted to shout out to the universe and see if it replied.  All of a sudden I felt I wanted to embrace all this stuff, not edit myself, not censor my taste. I didn’t want to play it safe. So I made myself open to all these wonderful collaborators I was lucky enough to work with, and found they in turn responded by doing the same.  Everyone just came on board with such enormous love and we mixed our creative DNA together.  Yumminess! 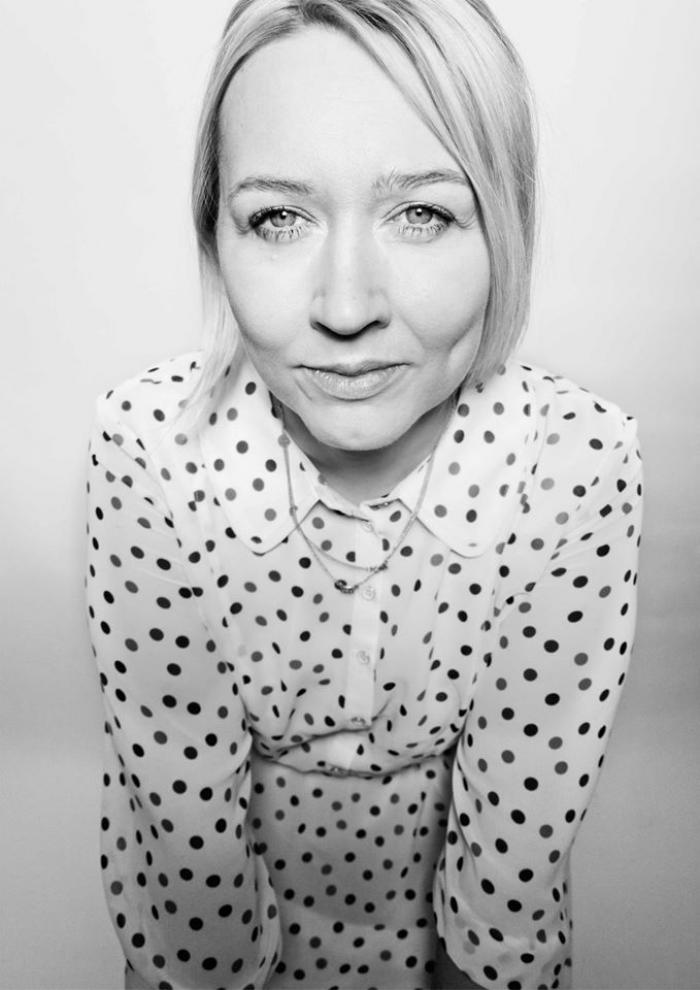 I’ve learnt so much by making Pin Cushion. I’ve learnt that I’ll always be learning and that is how it should be.  Striving to tell more stories, striving to work with brilliant teams.  Sharing minds and talents.

My vision for Pin Cushion is/was nothing more complicated than to attempt to put the images from inside my head upon the page and then transfer them to the big screen without any interference from my dreaded Inner Critic.  I hope we have achieved that and made an original film. When I watch it I can’t see how I would have done any of it differently.  I hope that by making a film this personal that others will recognise stuff they feel to be true about themselves, and I hope they feel less alone because of it.

A funny and devastating tale of female friendship, bullying and a unique yet somehow familiar mother-daughter relationship, Pin Cushion confidently flip-flops between an often harsh reality and heart-soaring fantasy.

Year Zero for Deborah Haywood’s striking debut (chosen to open Critics’ Week at the Venice Film Festival) was 2007, when Haywood and producer Gavin Humphries were both named among Screen International’s ‘Stars of Tomorrow’. It was here that their paths initially crossed. Now, a decade on, their first collaboration is making people sit up.

“We met there and stayed in touch,” says Humphries. “I really loved her. I saw her short Lady Margaret and thought she’d be someone I’d want to work with – she has a very compelling way of telling stories. And then Deborah came to me for the iFeatures, Creative England low-budget feature program in 2012. She had some pieces of an idea. We had a treatment and got accepted.”

“I wrote the treatment for Pin Cushion, or the logline for it, in 2008,” recalls Haywood. “Then I went off to make a short, and I was writing another feature film script. But in my heart, I knew I wanted to make this – I thought, ‘Oh god, I can’t let it go, because it’s so personal to me’. So I picked it back up and was like, ‘I /am/ going to make this.’ I went to Binger Film Lab in Amsterdam and did five months just working on the script and working out the characters, then came back and got in touch with Gavin. Luckily we partnered with the BFI and Creative England and the support they gave made it possible to move forward.”

The match was perfect, with Pin Cushion being just the type of project that is ripe for lottery funding, dealing as it does with vital topics that many will connect to, and heralding the arrival of an exciting new voice in British film-making. Through the BFI Net.work, Pin Cushion was nurtured: “We started really exploring it and digging deep into it,” says Haywood.

The writer/director had plenty to dig into for 2007 wasn’t really Year Zero for Pin Cushion at all. It in fact goes all the way back to Haywood’s youth in Swadlincote, South Derbyshire, where both this feature debut and all of Haywood’s award-winning shorts are set.

“I was bullied at school,” explains Haywood. “It was hard going back to where we filmed because that was the school. I was like, ‘Oh shit, I used to really get it here’. So that was tough but also empowering because I’ve changed the nature of that school now – I think of it as this creative experience where I’ve made a film, whereas before I used to shut my eyes when I drove past it.”

Whatever considerable talents Haywood and her department heads brought to the table, Pin Cushion was always going to soar or fall depending on who played Iona, the timid teenage girl who frequently concocts fairytale fantasies to escape reality. It was a big ask: finding an actress who not only looked otherworldly but possessed the acting chops to navigate Iona’s dizzying journey of ups and downs.

“Kharmel [Cochrane], the casting director, got a load of tapes and got people in and filmed them,” says Haywood. “We had something like 400 girls to look at. And I was just going through them, thinking: ‘Is she Pin Cushion or isn’t she?’ I saw Lily [Newmark] and thought ‘She’s got an interesting face’. She was like a beautiful, rare salmon. And then when I pressed play, the essence about her was, ‘Yeah, she’s Iona’, even though I thought Iona would look like a doll with long, brown, dark, shiny hair and big, blue eyes. Lily doesn’t look like that but she’s Iona. So I asked to meet her and she had that fairy-tale quality about her. When I met her she said, ‘I’m off to the forest now…’ She was off to Waltham Forest for a walk on her own. It was like Pin Cushion.”

“We were looking for a particular quality,” adds Humphries. “I think Deborah will say that she had to be a little bit like an alien, in that she’s beautiful but not in the way that girls that age are usually presented to be beautiful. She needed to be different, stand out. We looked at models, singers, and we street cast. Lily has had a career as a model but she trained as an actor and that’s where her heart is. She was instantly compelling. I didn’t know it at the time, but she’s older, in her twenties, and had the emotional intelligence about who the character is and how to portray that. And also her own experience…”

“Iona is a lot like me,” confesses Newmark. “When I was 15, I was exactly like her. We had the same experiences. I’ve changed since then, and I have hindsight now. Now I’m amazed by that story and her story, so I was so happy to be able to do it.”

Also key was the casting of Iona’s mum, Lyn, a woman who, like her daughter, struggles to make true friends and who often uses fantasy to soothe the hard edges of reality. Until now, Lyn and her daughter have always sought solace in each other. But the hitherto inseparable pair begin to tear apart as Iona discovers a trio of girlfriends (or at least frenemies), boys and the numbing effects of alcohol.

“Lyn’s not able to see the edges between herself and her daughter,” says Scanlan. “She’s enmeshed with her, and she’s needy of her love. But it’s not malign. It’s a flaw but it comes from a good place. She doesn’t want to cause her daughter harm.”

The characters that orbit Iona and Lynn, impacting on their lives, are indelibly played by actresses who were all wowed by the script’s freshness and boldness.

“I read Pin Cushion on my phone on the bus in one go,” says musical-comedian/actress Isy Suttie, who boasts Peep Show and Shameless among her many credits. She here plays Anne, the leader of a self-help group that is attended by Lyn.

“I’d never read anything like it. It was so bold: really dark and really funny. It’s hard to do that, but it’s Debbie’s style – it’s in her short films as well. She manages to go to the deepest, darkest corners and somehow find humour without taking away from the weightiness of the topics. It felt really exciting and new.”

Chanel Cresswell plays Belinda, a neighbour who borrows Lyn’s step-ladders and refuses to return them. She’s previously acted for Shane Meadows in This Is England and its subsequent TV series, yet freely confesses to also being flabbergasted by the script’s freshness. “It’s love, loss, sadness… there are so many emotions in there, it’s difficult to pinpoint,” she says. “And there’s a dreamlife too. And a lot of innocence.”

One thing she is certain of is that all of these jostling emotions add up to a movie with wide appeal: “It’s all very relevant,” she nods.

Also on board, as the glamorous airhostess who Iona fantasises to be her mother when she escapes into her dreamworld, is Irish singer-songwriter-model Nadine Coyle. And while the former Girls Aloud star popped up as a school band member in 2007’s St. Trinian’s, Pin Cushion serves as her true acting debut. It was a film that she simply could not turn down: “The script was fascinating,” she smiles. “It takes you on a journey of a teenager’s life, and will definitely resonate with all types of people.”

Scroll to Top
We use cookies to ensure that we give you the best experience on our website. If you continue to use this site we will assume that you are happy with it.Ok